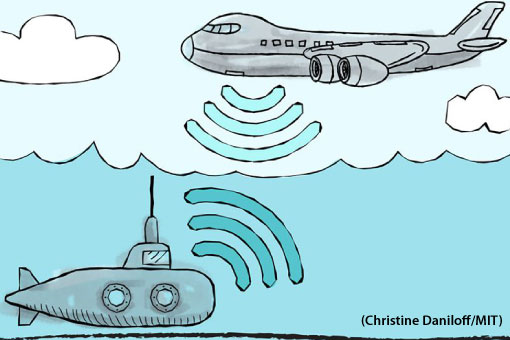 We can video chat with astronauts aboard the International Space Station and watch live footage from the frozen heights of Everest.

But communicating with a submarine or a scuba diver? Not so easy. The lack of viable methods for sharing data between underwater and airborne devices has long been a frustration for scientists, engineers, divers and military officials alike.

Now, researchers at MIT have developed a method with the potential to revolutionize underwater communication.

“What we’ve shown is that it’s actually feasible to communicate from underwater to the air, which has been a longstanding problem,” says Fadel Adib, a professor at MIT’s Media Lab, who led the research.

The difficulty stems from the fact that underwater and airborne sensors use different kinds of signals. Radio signals that work perfectly in air travel poorly in water. Sonar signals used by underwater sensors reflect off the surface of the water rather than reaching the air.

The MIT researchers designed a system that uses an underwater transmitter to send sonar signals to the surface, making vibrations corresponding to the 1s and 0s of the data. A surface receiver then reads and decodes these tiny vibrations. The researchers call the system TARF (translational acoustic-RF communication).

TARF has any number of potential real-world uses, Adib says. It could be used to find downed planes underwater by reading signals from sonar devices in a plane’s black box. It could allow submarines to communicate with the surface. And it could make marine research much easier, by letting scientists deploy underwater sensors that transmit data back to the air in real time. Right now, any data collected underwater needs to be brought to the surface by the device before it can be examined.

“It’s very difficult to monitor the ocean, which is why most of the ocean remains unexplored,” Adib says. “Using this technology, you could now deploy sensors and do continuous monitoring and send the data to the outside world. You could study marine life and have access to a whole new world that is still pretty much out of our reach today.”

Right now the technology is low-resolution, but Adib imagines it could one day be used for streaming video. Think shark cams to monitor breeding grounds, or live feeds of the strange life forms in trenches.

"The ocean surface is a big barrier to data transfer and communication," says Emmett Duffy, director of the Smithsonian's Tennenbaum Marine Observatories Network. "Marine scientists use lots of sensors that we currently have to visit underwater to download the data. If data could be beamed through the air, as it can be for sensors on land, this could revolutionize several areas of marine biological research."

Duffy says underwater-air communication could make it possible to get tracking data from large marine animals outfitted with tags without having to recapture them, which could help scientists understand migration and habitat patterns. It could also be used to retrieve data from in situ underwater sensors automatically, letting scientists track harmful algae species or other animals as they pass. It could help divers doing biological surveys to use online tools underwater.

Adib and his graduate student, Francesco Tonolini, co-authored a paper about the technology, which they presented at a conference on data communication in August.

The initial proof-of-concept study was conducted in the MIT swimming pool at maximum depths of around 11 or 12 feet. The next steps for the researchers are to see if TARF is workable at much greater depths.

“We want to be able to take this to the wild and operate at tens or hundreds or even thousands of meters,” Adib says.

The team is also experimenting with how well the technology works under varying conditions—high waves, storms, amidst swirling schools of fish. They also want to see if they can make the technology work in the other direction—air to water. That would allow scientists to communicate with underwater devices; for example, resetting the parameters on a marine monitor.

“This is a very interesting demonstration, albeit on a limited scale, of the potential of using microwave radar as the link between an airborne device and an underwater acoustic system,” says Jeff Neasham, a lecturer at the University of Newcastle in the UK, who has studied underwater acoustics. “As the authors noted, further work is needed to investigate the scalability of the system, to see if useful ranges for both the air and sea channel can be achieved with practical power levels, and also to understand the effects of more realistic wave conditions on the sea surface.”

If the technology proves successful in real world conditions, expect “texting while diving” to be the latest underwater craze.